INVEN CAPITAL expands to industry 4.0, investing in a progressive Czech start-up who is a leader in acoustic diagnostics of machines.

INVEN CAPITAL, a ČEZ Group investment fund that seeks investment in promising European smart energy startups has acquired a minority interest in Neuron Soundware, the Czech based market leader in industrial machine diagnostics based on acoustic analysis. The company develops and markets advanced hardware and software for predictive maintenance, enabling timely detection of failures and optimisation of operations. In its four years in business, INVEN CAPITAL has made ten investments in five countries, one of which it has subsequently successfully exited. 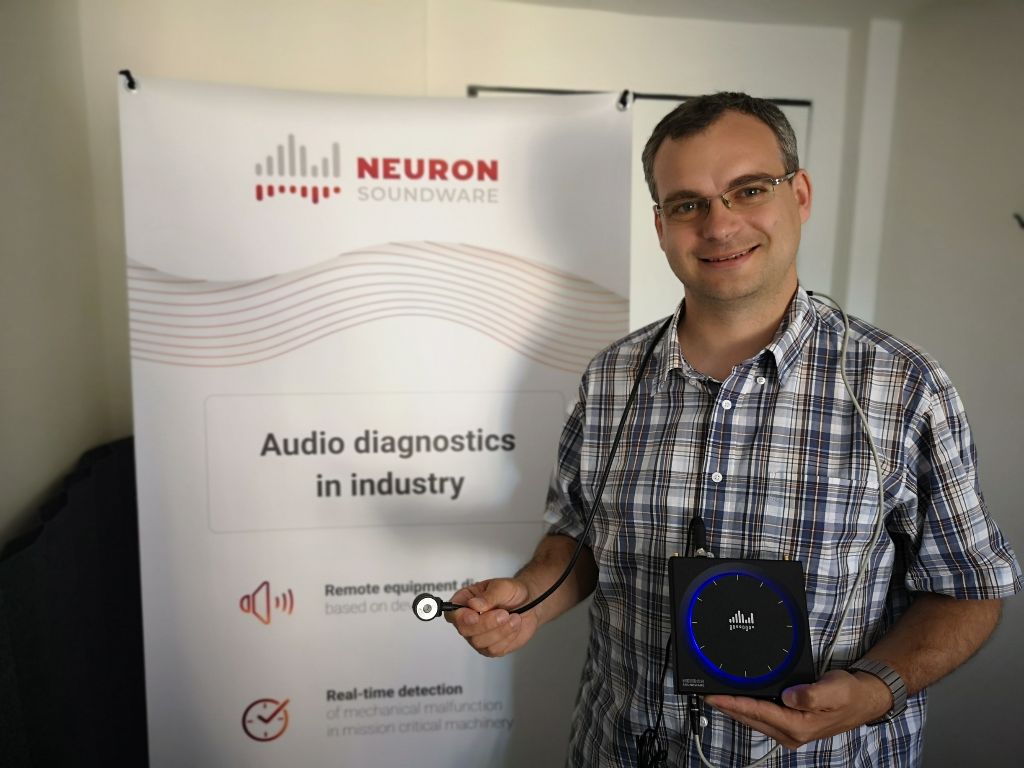 Neuron Soundware was founded in February 2016 in Prague. It currently employs twenty experts and its revenues amounted to almost half-million Euro last year. It delivers smart diagnostic solutions based on the acoustic analysis of machines in several industries including the energy sector. The system uses artificial intelligence to recognise impending problems in machines, thereby preventing breakdowns of critical manufacturing equipment.

The solution is a combination of detection sensors, computing unit, software, and artificial intelligence. Piezo-microphones, with an extremely broad frequency band, are installed in all important segments of a machine, capturing the sounds emitted by the machine. Artificial intelligence algorithms continuously assess the collected acoustic signals as well as other data, reporting any deviations from the normal operation sooner than the standard protective features of the equipment. Thanks to this it is possible to identify the failure early and ensure a remedy or replacement before the operation of the machine is impaired. This is important especially in cases when a machine is a part of a sophisticated production line, where every sudden outage may involve a great loss.

Today, systems supplied by Neuron Soundware guard the operations of several large global corporations, such as Daimler, VW, Innogy, E.ON, Airbus, and LG. In the energy sector, Neuron Soundware has a sizeable implementation with a fleet of more than 20 large combined heat and power units for some customers in the Czech Republic.

INVEN CAPITAL bought into Neuron Soundware, together with the investment fund LEAD VENTURES, in the current second round of financing.

“Timely diagnostics of undesirable phenomena in operations is an integral prerequisite for effective production planning and for managing modern energy-generating companies.  We expect that the deployment of these new technologies will contribute to the reliable operation of our generation assets,” says Vice Chairman of the Board of Directors of ČEZ and Director of the New Energy and Distribution Division Tomáš Pleskač.

By installing similar early warning systems, energy companies, as well as other firms, reduce the risk of sudden outages.  In the energy sector, it is yet another safety feature ensuring stable energy production and distribution, outages in which could have a impact on the functioning of the entire national economy.  At the same time, the series of measures is further supplemented in line with ever-tightening legislation.

„Neuron is one of a few companies in acoustic emission analysis which is able to compete with top class Israeli and US companies. During its short existence it has developed an unique database of sounds which are used for training of its proprietary neural networks,“ says Petr Míkovec, managing director of INVEN CAPITAL.“We are glad that our portfolio of investments in innovative companies is now expanding also to the Czech Republic and we believe that with this investment and our active engagement we can help the company to further grow,” adds Viktor Miškovský, Investment Director of INVEN CAPITAL.

“We know exactly how pumps, gearboxes, cylinders, electromotors, or compressors should sound.  The sounds of all regular components of a machine are stored in a database.  But that is not enough, our artificial intelligence software is able to distinguish problem noises from regular process hum and surrounding sounds, giving the customer the certainty that the machine will not pull off any unpleasant surprises,” says Pavel Konečný, founder and CEO of Neuron Soundware, revealing the secrets of his know-how.

Over its more than four years in business and investing in energy start-ups, INVEN CAPITAL has acquired the reputation of a qualified and capable investor that supports start-up companies in the smart energy sector.  Great management team, the portfolio of its invested companies, the fund’s performance, and successful due diligence were behind the decision of the European Investment Bank (EIB) to form a joint investment structure with INVEN CAPITAL, in which EIB undertook to entrust EUR 50 million in INVEN CAPITAL’s management.

INVEN CAPITAL is a venture capital fund of ČEZ Group supported by the European Investment Bank (EIB).  EIB financing comes from the European Fund for Strategic Investments (EFSI).  INVEN CAPITAL’s strategy is to seek investments in smaller, innovative and growing smart energy companies.  It focuses primarily on investment in later stage growth opportunities with a business model, proven by income and long-term growth potential.  INVEN CAPITAL’s objective is to create long-term value through active cooperation with the management of the companies in which it invests, and to actively support strategies of organic or acquisition growth.  Companies in INVEN CAPITAL’s portfolio will have an opportunity to take advantage of extensive expertise of ČEZ Group companies in the energy sector, its client base, and technological synergies for their further development.  The fund is a member in good standing of Invest Europe (https://www.investeurope.eu) – the European Private Equity and Venture Capital Association, and of CVCA (http://www.cvca.cz) – the Czech Private Equity and Venture Capital Association.

INVEN CAPITAL’s premiere investment was its 2015 buy-in to the Bavarian company sonnen, the world leader in the production of intelligent battery systems for storing energy for households.  This was followed by the acquisition of ownership interests in the German companies Sunfire (develops and scales up cutting edge energy technologies based on fuel/electrolyte cells that contribute to CO2 emission reduction and to the development of decentralised sources) and tado°, Europe’s number one in smart thermostats.  In 2017, it bought into the German company Cloud & Heat Technologies,engaged in the utilisation of heat from decentralised datacentres in the generation of energy, and into the French corporation Vulog, a major global player in technology solutions for environmentally conscious carsharing. 2018 was marked by the acquisition of an interest in the French Cosmo Tech platform, engaged in the development of a software platform for management decision-making optimisation.  It made its first investment in Israel this year, when it bought into the corporation Driivz, which offers comprehensive solutions for the electromobility sector, followed by an investment in CyberX, an industrial cyber security expert.  Some of the solutions from produced by several of the companies mentioned have already been included in the offer for ČEZ Group customers.  In February 2019, INVEN CAPITAL completed the first sale from its asset portfolio, thereby fulfilling the assignment to provide returns from successful investments to its parent group. Within this exit case the fund’s stake in sonnen, the present world leader in the production of intelligent battery systems for storing energy for households, has been acquired by the oil and gas major Royal Dutch Shell.