Unipetrol and ČEZ have further expanded the offer of the Benzina network with electricity. Benzina now offers fifteen fast-charging stations at twelve locations – newly in Břeclav, Domažlice, Hlinsko and Siřejovice.

Unipetrol continues expanding the number of locations within Benzina’s network of filling stations where drivers are offered not only conventional fuels but also electric energy from fast charging stations. The filling stations with the newly installed fast-charging stations from ČEZ can be found in Břeclav near the D2 motorway, Siřejovice on the D8 motorway, Domažlice and Hlinsko. At twelve Benzina locations all over the Czech Republic, a total of fifteen fast-charging points from ČEZ are in operation now. 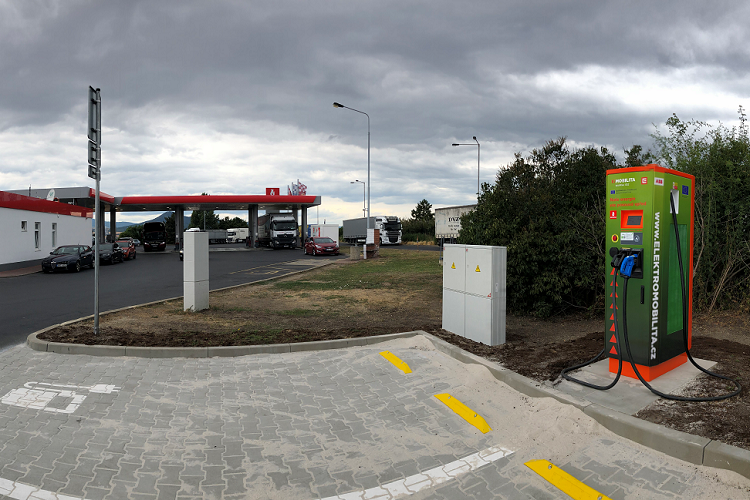 Benzina, the largest chain of filling stations in the Czech Republic that is part of the refinery and petrochemical group Unipetrol, is gradually expanding its offer with fast charging of electric vehicles. In cooperation with the Elektromobilita division of the ČEZ Group, Unipetrol equips its filling stations with fast-charging stations that enable the majority of electric cars to recharge most of their battery’s capacity within 25 minutes. The new fast-charging stations have appeared at Benzina sites all over the country in recent days. One station each is available in Břeclav near the D2 motorway, Siřejovice on the D8 motorway and Hlinsko. Two stations are available in Domažlice.

“We want to offer as wide a portfolio of products and services at out Benzina stations as possible. In addition to conventional fuels, we offer alternative fuels – LPG and CNG – and we are also gradually introducing electrical energy. Together with ČEZ, we plan to install chargers at dozens of Benzina stations situated in busy locations – in towns and cities, along motorways and first-class roads,” said Tomasz Wiatrak, Chairman of the Board of Directors of the Unipetrol Group.

ČEZ plans to deploy fast chargers at selected locations in two years. “As a result of the fast electromobility development expected in the Czech Republic in the coming years, we will need hundreds of charging points, and ČEZ has the ambition to remain a market leader in this area. This year, we want to beat the landmark of 200 public charging points in our network, two thirds of which should enable fast charging of batteries of electric vehicles. The successful cooperation with Benzina helps us significantly accelerate the construction of our network of fast-charging stations located mainly along the main routes throughout the Czech Republic.” saidPavel Cyrani, Director of the Business and Strategy Division of ČEZ.

Twelve Benzina outlets throughout the Czech Republic currently offer fifteen fast chargers of ČEZ. Unipetrol and ČEZ installed the first two fast charging stations last year at the Benzina station at the D1 motorway in Rousínov u Vyškova. This installation was followed by the deployment of chargers in Ostrava-Zábřeh (nearby the slip road from D1), Plzeň-Borská pole (at D5), Hradec nad Svitavou (about halfway between Hradec Králové and Olomouc, nearby the future D35 motorway), České Budějovice, Bochov on Road I/6 (future Motorway D6) and in Kladruby (at D5). The beginning of the mutual cooperation of Unipetrol and ČEZ dates back to 2014 when ČEZ installed a fast charger at a Benzina station in Vrchlabí as part of the Smart Vrchlabí Region project.

The construction of the network of ČEZ chargers is partly funded through two grants of the CEF Programme for the Transport Segment where ČEZ succeeded in the calls announced in 2017 and 2018. The European Commission uses this programme to support interconnection of Europe by building charging stations along the main TEN-T road network. ČEZ consistently installs ABB chargers in all locations. Their standard equipment includes DC connectors with CHAdeMO and CCS charging standards enabling to charge with an output of up to 50 kW. The stations are connected to a cloud-based platform allowing real-time monitoring and remote diagnostics of the device.

The Unipetrol Group is the largest refinery and petrochemical company in the Czech Republic. It focuses primarily on crude oil processing, distribution and sale of fuel and petrochemical products — particularly plastics and fertilizers. In all these fields, the group is a key player on both the Czech and Central European market. The Unipetrol Group includes refineries and production plants in Litvínov and Kralupy nad Vltavou, Paramo with the Mogul brand in Pardubice and Kolín, Spolana in Neratovice, and two research centres in Litvínov and Brno. Unipetrol also owns the Benzina network of petrol stations with 413 stations, which is the largest chain in the Czech Republic. Unipetrol is one of the largest companies in the Czech Republic in terms of turnover. The group created revenue of over CZK 130 billion last year and employs more than 4,800 people. In 2005, Unipetrol became part of the PKN Orlen Group, the largest crude oil processor in Central Europe. For more information see www.unipetrol.cz and https://twitter.com/unipetrolcz

Benzina is part of the Unipetrol Group and runs the most extensive network of filling stations in the Czech Republic. It has undergone a rich development over 61 years of its existence. It is a traditional, yet modern brand for Czech drivers characterised by top-quality fuels and first-class customer services. In addition to EFECTA fuels with a purifying effect, Benzina offers premium fuels VERVA and a wide selection of refreshments as part of its STOP CAFÉ concept. Benzina also issues its own fuel cards, EASY and BUSINESS. It operates 413 filling stations in the Czech Republic and has a market share of 23.4%. It entered the Slovak market this year when it rolled out its first filling station in Malacky in April.

The ČEZ Group has been active in the area of electromobility development since 2009. Since the very beginning, its primary activity has been the construction and operation of public charging stations. Today its scope is much wider and includes a service to customers from the retail segment (ČEZ Prodej, s.r.o.) as well as a service to clients from the business sector, municipalities or regions (ČEZ ESCO). The ČEZ Group provides, for example, design and installation of turnkey charging stations, electrification of car fleets, charging platforms, including IT solutions, rentals or sales of electric cars or wall boxes and charging cables. For local authorities, ČEZ offers the implementation and operation of charging stations for electric buses or design of electromobility concepts in individual towns and regions. For more information visit http://www.elektromobilita.cz/cs/mapa-dobijecich-stanic.html.